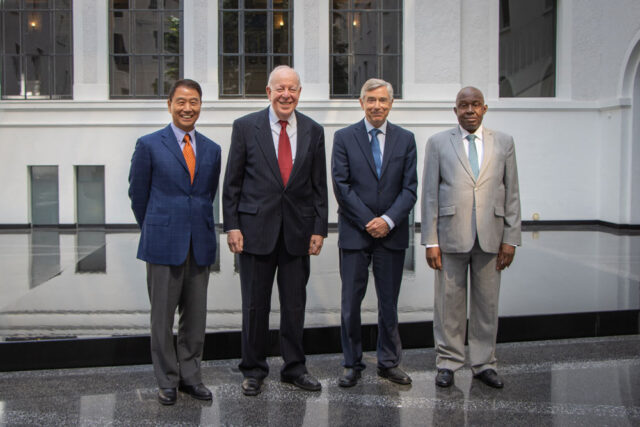 The nomination period for the 2020 Director General selection process ended on 8 July. The second phase of the process in which the candidates “make themselves known to members” ended on 7 September. On that date, the third phase began.

The Chair of the General Council, together with the chairs of the Dispute Settlement Body and the Trade Policy Review Body, will start to consult with all World Trade Organization members to assess their preferences and seek to determine which candidate is best placed to attract consensus support. The third phase will last no more than two months.

At the General Council on 31 July 2020, it was agreed that following the departure of Roberto Azevêdo as Director-General on 31 August 2020 all four Deputy Directors-General would stay on and continue their existing responsibilities until such time as the new Director-General takes office. From left to right: Yi Xiaozhun, Alan Wm. Wolff, Karl Brauner, Yonov Frederick Agah.

The eight candidates were nominated by their respective governments

The following candidates have been nominated by their respective governments for the post of WTO Director-General to succeed Mr Roberto Azevêdo. The candidates are listed in the order the nominations were received.

The World Trade Organization (WTO) is the only global international organization dealing with the rules of trade between nations. At its heart are the WTO agreements, negotiated and signed by the bulk of the world’s trading nations and ratified in their parliaments. The goal is to ensure that trade flows as smoothly, predictably and freely as possible.

OECD candidates for next Secretary-General

25th anniversary of the WTO