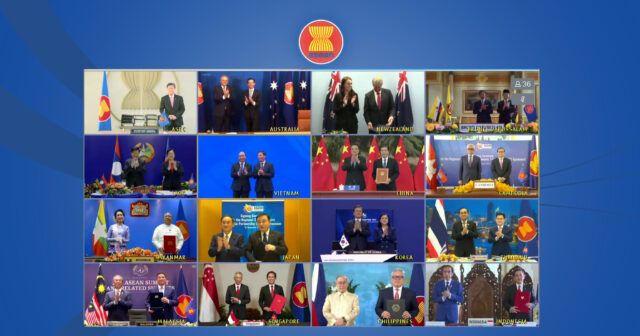 China, Japan and 13 other Asia-Pacific nations have signed the world’s largest trade bloc in a deal many hope will hasten the region’s recovery from the shocks of the pandemic

The Regional Comprehensive Economic Partnership, or RCEP, was signed on Sunday on the sidelines of the annual summit of the Association of Southeast Asian Nations (ASEAN), held via video conference due to the pandemic. The virtual summit was hosted by Vietnam which held the rotating chair position in the run-up to the event.

The RCEP marks ASEAN’s biggest free trade pact to date, covering a market of 2.2 billion people with a combined size of US$26.2 trillion or 30% of the world’s GDP.

Ten ASEAN nations, plus five other Asia-Pacific countries, have signed the world’s biggest trade deal in terms of GDP. “The signing of the RCEP Agreement is a historic event as it underpins ASEAN’s role in leading a multilateral trade agreement of this magnitude, despite global and regional challenges and eight years of negotiations,” said Dato Lim Jock Hoi, Secretary-General of ASEAN. More about trade agreements HERE.

The deal will improve market access with tariffs and quotas eliminated in over 65% of goods traded and make business predictable with common rules of origin and transparent regulations, upon entry into force. This will encourage firms to invest more in the region, including building supply chains and services, and to generate jobs.

ASEAN, an organization of Southeast Asian countries, which includes Brunei, the Philippines, Indonesia, Cambodia, Laos, Malaysia, Myanmar, Singapore, Thailand and Vietnam, was founded in 1967. From the beginning of 2020. it is led by Vietnam, and the leadership of the organization takes place on an annual rotational basis.